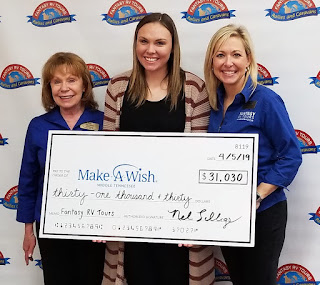 (NASHVILLE, Tn.) — When 100 guests showed up on April 1, 2019 for Fantasy RV Tours’ 10th Reunion RV Rally in Nashville, Tennessee, they expected to have a great time. That they did, but they also made a substantial and precious gift to Make-A-Wish of Middle Tennessee.

Activities at the six-day Rally included tickets to the Grand Ole Opry, lunch and line dancing at the Wild Horse Saloon, Ray Steven’s Dinner Theater, a costume party and dance, bingo, ice cream and much more. But the most meaningful part of the Rally occurred when the group gathered for a Mystery Auction to benefit Make-A-Wish Middle Tennessee, an organization which grants wishes to critically ill children.

The live auction featured wrapped mystery gifts, with gag clue gift on top. Although they did not know what was in each box, Fantasy guests had fun bidding and imagining what their prize might be, all the time raising funds for Make-A-Wish. The group raised $15,515, and several bids were matched by Fantasy RV Tours and its Founder/CEO, Nel Filliger, bringing the total to $31,030.

Filliger has a strong personal connection to Make-A-Wish. Her 12-year-old grandson Dylan Prunty suffers from mitochondrial disease – a rare genetic disorder which causes his cells to not create enough energy to sustain his body. He has spent most of his life in Children’s Hospital in Los Angeles where he has undergone several surgeries and suffers from immense pain. Over the years, he has become an expert at building intricate Lego sets which helps him deal with severe pain. His wish was to visit Legoland and also ride a train.  In 2014 The Lego Corporate Group and Make-A-Wish arranged for Dylan to not only visit Legoland but also to work with their Master Builders to design a replica of Children’s Hospital, even including the hospital helicopter pad where Dylan has been airlifted to several times and Dylan’s own hospital room. After a dream weekend at Legoland, Dylan and his family returned to Los Angeles via train. 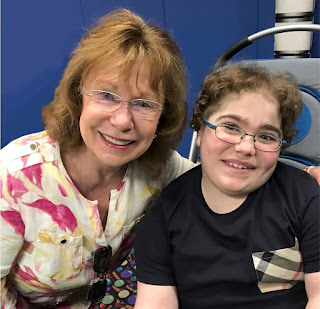 In 2015, Fantasy RV Tours held its first Mystery Auction and has continued the event each year raising nearly $100,000 for local Make-A-Wish chapters. “Make-A-Wish uses the money to make wishes come true,” said Nel. “They organize everything – some wishes are more complex than others, but Make-A-Wish captures the heartfelt wish of each child.”

This year’s Fantasy Rally donation will make three children’s wishes come true, according to Maggie Schwartz, Events Coordinator for Make-A-Wish Middle Tennessee chapter, as each wish averages about $10,000 in costs. “Our goal is to grant 175 wishes this year, and to get three from this Rally in a matter of two hours is really amazing and special,” she says. “I was somewhat surprised. We all know the power that a wish can have but seeing the way Fantasy guests responded to the call to action was incredible. When people believe in the power of a wish and see the impact that it can have, really cool things can happen.”

Fantasy’s 2019 fundraiser was by far the most successful. “When a child’s wish comes true, it not only brings them joy but gives them strength to overcome their obstacles,” said Nel. “We’re just so overwhelmed by the generosity of our Fantasy family.”

FANTASY RV TOURS is among the world’s most distinctive RV tour companies, providing sought-after RV vacations to 60 destinations throughout the USA, Canada, South Africa, Australia, Europe, and other worldwide locations. With nearly 40 years in the RV industry, Fantasy has taken more than 70,000 RVers on trips, and is the global leader in escorted RV travel.
Posted by NewsSource at 1:53 PM No comments: